Making Friends with Both Expats & Locals While Teaching English in Colombia 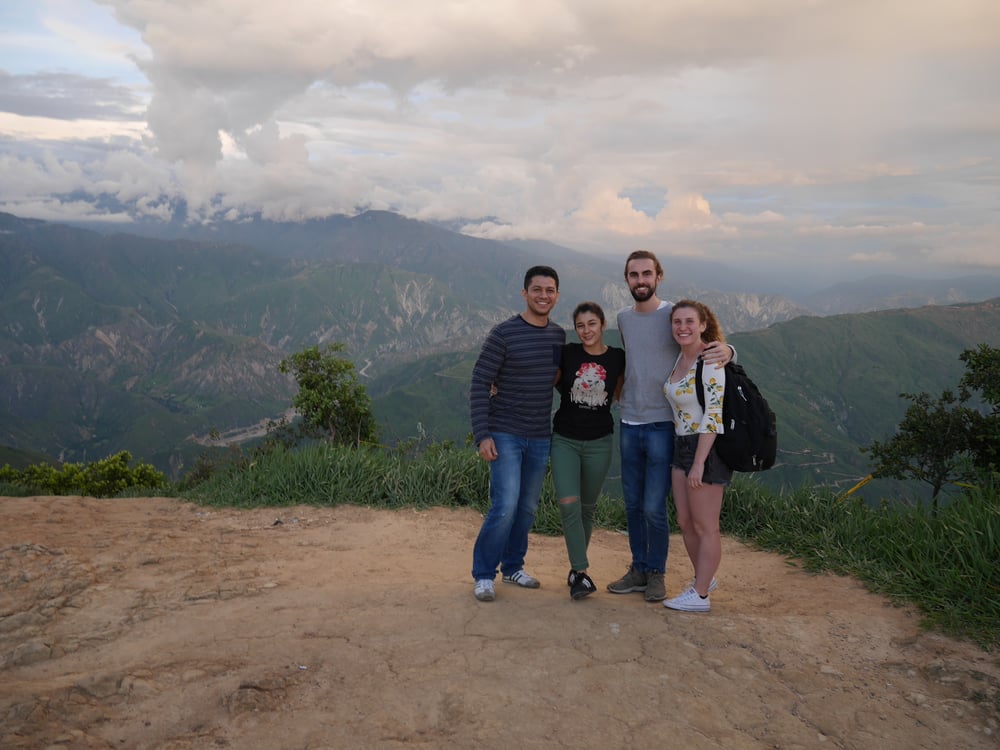 One of the best parts of teaching abroad is the opportunity to meet interesting people. Being in a new country always makes me feel more open to other new experiences, and I’m much more likely to strike up conversation with a stranger than when I’m back in the US. Most other expats I’ve met tend to have the same mentality, so it’s incredibly easy to connect with people from all over the world when you’re living in a new place.

I’ve now taught English in two countries and had very different experiences as far as meeting expats and locals. At my first school in Arequipa, Peru, there was a large international staff of fellow teachers who were very friendly and eager to explore our new city together. It almost felt like my freshman year of college, as everyone was looking to make new friends, and I never had to go very far for someone to hang out with. 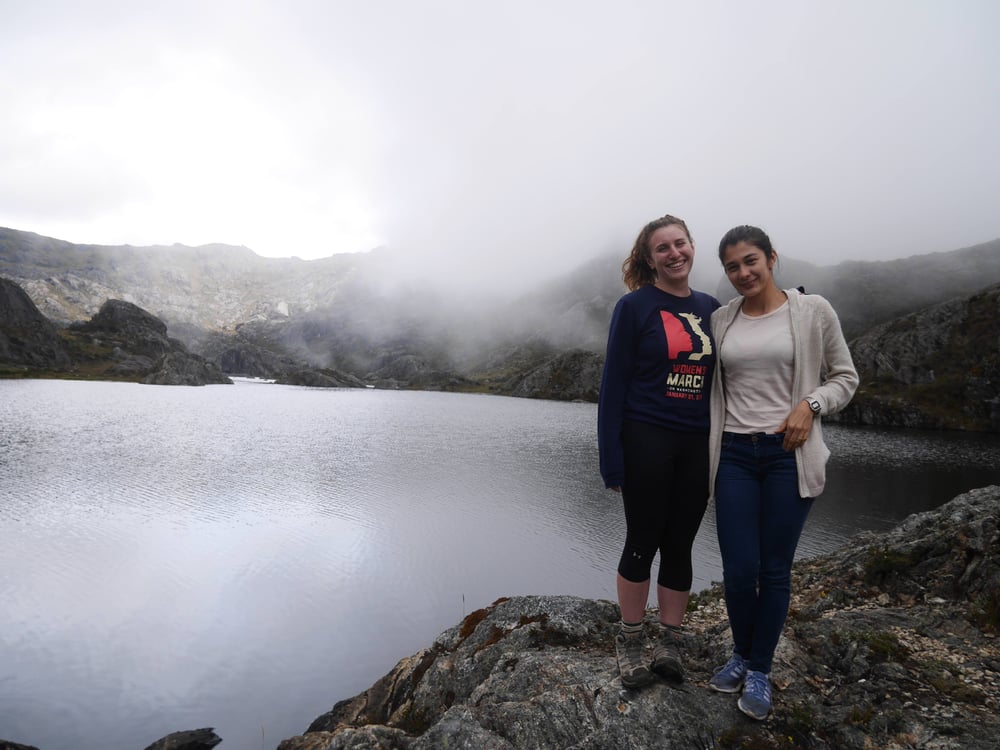 Now, living in Bucaramanga, Colombia, I work at a much smaller school and have had to get a bit more creative to make friends. I’ve pushed myself out of my comfort zone and made a real effort to meet more locals, rather than only other expats. I ended up in some incredible experiences and unexpected friendships that I never would have had without putting in a bit of effort. Here are some of the ways I’ve met my friends here in Bucaramanga:

My school is relatively small with about ten teachers in total and only two other native English speakers. Because of this, we’ve all gotten to know each other pretty well, especially since some of the Colombian teachers are originally from other cities and didn’t know many people in Bucaramanga when they first arrived. Our school has also organized some events like a St. Patrick’s Day party and a gift swap for the Colombian “Love and Friendship” Day. From all the time we spend together, we’ve become expert Spanglish speakers and pros at explaining our own weird local traditions and slang words. 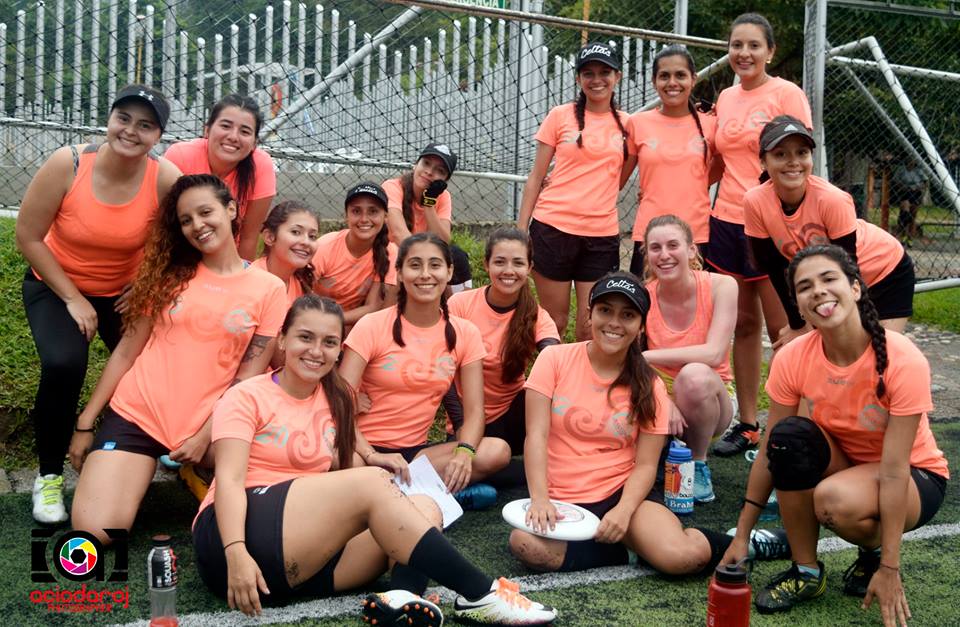 Of course, futbol aka soccer is the most popular sport in Colombia, and you can make plenty of friends (or enemies) watching a game at a neighborhood bar or restaurant. There are also lots of pick-up games around the city with newcomers welcome.

Personally I have embarrassingly little knowledge of soccer, but I did play ultimate frisbee in college. Lucky for me, Colombia has a HUGE ultimate community and I quickly found a team to play on here in Bucaramanga. We’ve traveled to tournaments in other cities and hosted some of our own, where I’ve met tons of people from around Colombia and Venezuela.

I’ve also gotten involved in a running club, which has group training sessions and participates in races every month or so. It’s a great way to see more of the city while also meeting people who are friendly and encouraging.

Long hours of one-on-one studying and conversation can help you get to know someone really well, really fast. Many students who want a native English-speaking teacher are mostly looking for conversational practice so you’ll end up sharing all kinds of personal information. I’ve gotten into tons of interesting discussions with my private students, including everything from our families and careers to religion and politics. Now, some of my former students have become my closest friends in Bucaramanga and we continue to meet up even after finishing formal classes. 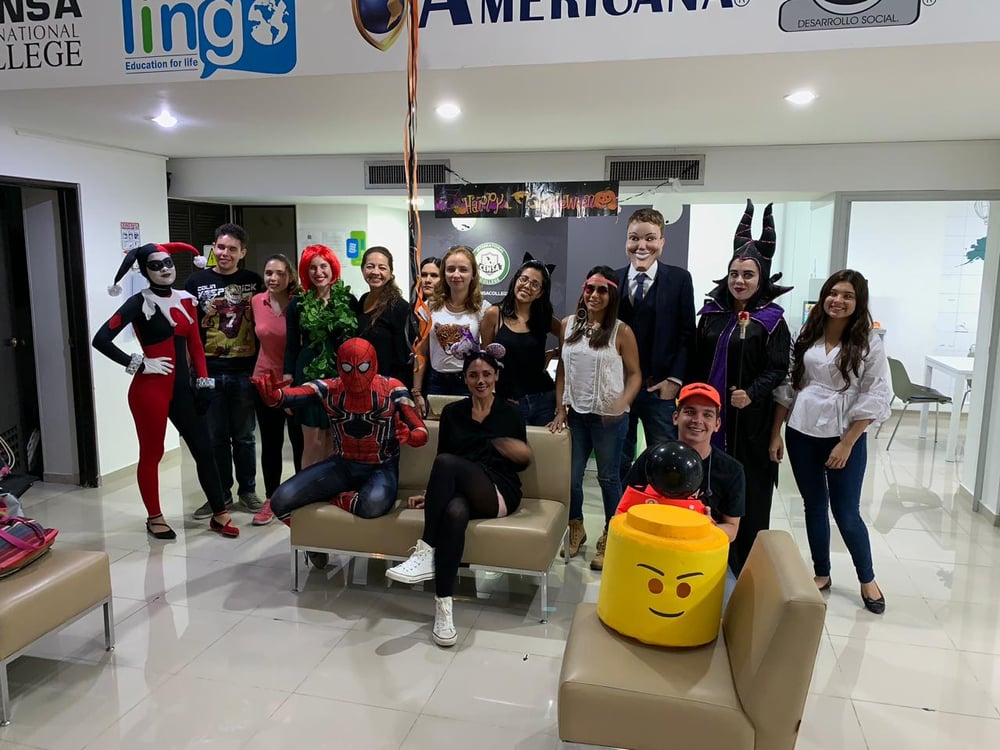 There isn’t an enormous expat community in Bucaramanga, but it’s very easy to find through a recently-created Facebook group. People will periodically post about meet-up events as well as questions and advice. We had an expat thanksgiving potluck (which I unfortunately couldn’t attend), and I’ve also connected with individuals through the group.

It’s also possible to meet people through one of the many general Colombia Facebook groups. Especially if you plan on visiting other parts of the country while you’re here, you can always find a travel buddy online.

Colombianos are super friendly and will start up a conversation with you anywhere and everywhere. Whether I’m sitting in the park or going out for an ice cream, I’ll usually end up chatting with someone. Not only is it a great way to practice my Spanish, but it also makes me feel right at home and always welcome here. 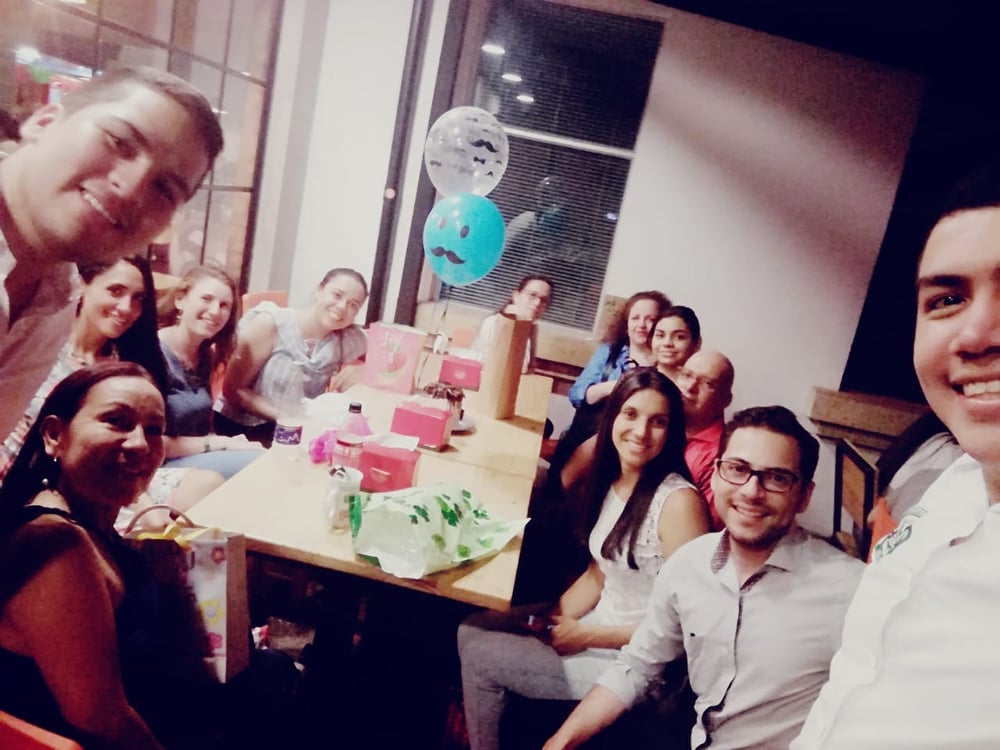 Never one for 5-year plans, Rebecca graduated with a communications degree and no idea what to do with it (or rather, too many ideas what to do with it). A month after throwing her cap in the air, she boarded a plane to begin teaching in Peru, and later Colombia. Read more about Rebecca. 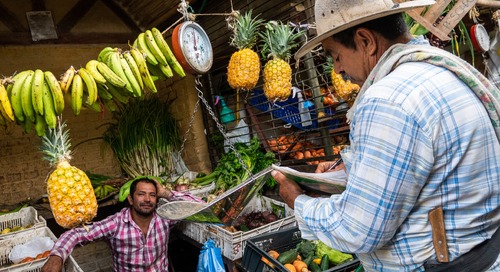 Fascinating Experiences You'll Have in and Around Bucaramanga, Colombia

By Rebecca Sirull The best parts of traveling, and especially living, abroad are never the thin... 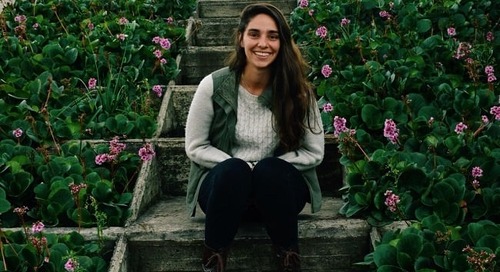 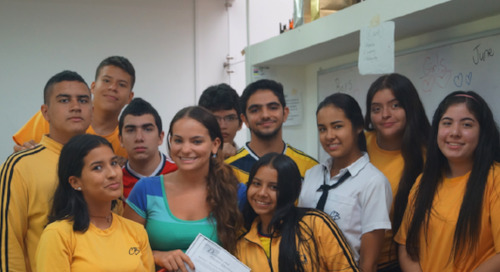 What Type of Visa Can I Use to Teach English in Colombia?

Interested in teaching English in Colombia? You're in the right place! Visas are an important part of planning your adventure overseas, so you want to make sure... 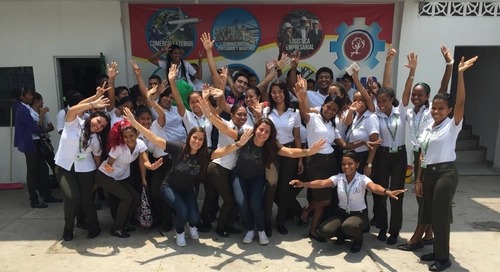 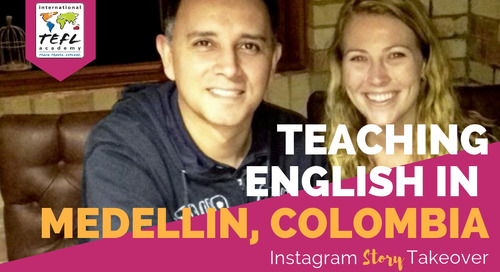 3:43
Day in the Life Teaching English in Medellin, Colombia with Brianna Brage

<p>In this video, see what it's like to teach English in Medellin, Colombia, thanks to ITA Ambassador Brianna Brage.</p> <p>Feeling Inspired? Teach English abroad with International TEFL Academy! Get 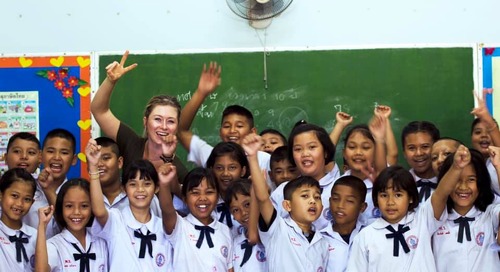 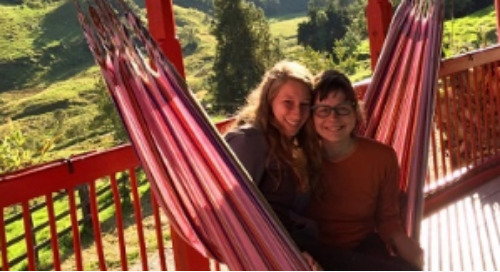 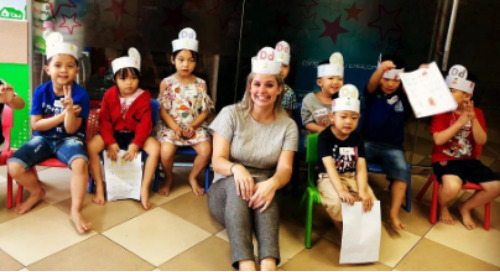 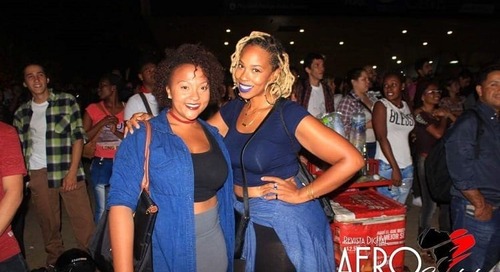 Is Colombia Safe? Tips for Staying Safe & Making the Most of Your Experience in Medellín 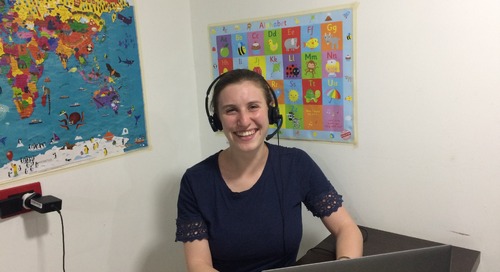 My Typical Weekly Schedule Teaching English in Colombia at a School, Online, & Privately

By: Rebecca Sirull My favorite thing about teaching English in Colombia is that no two days are alike, and I have tons of flexibility to make my own schedule. That’s also one big... 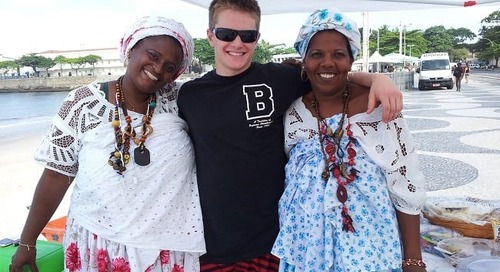 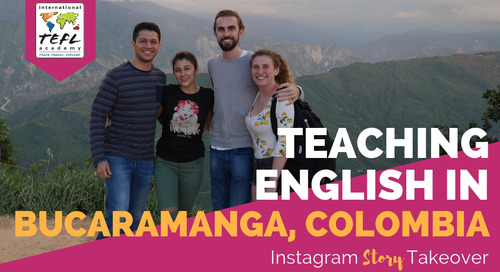 5:57
Day in the Life Teaching English in Bucaramanga, Colombia with Rebecca Sirull

<p>In this video, see what it's like to teach English in Bucaramanga, Colombia, thanks to ITA Ambassador Rebecca Sirull.</p> <p>Feeling Inspired? Teach English abroad with International TEFL Academy! 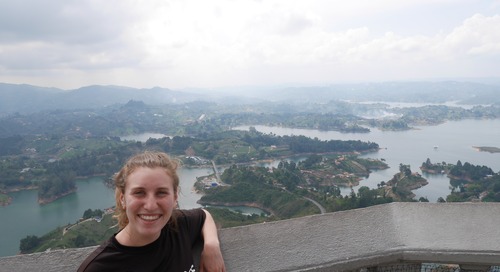 The Finances of Living and Teaching English in Bucaramanga, Colombia

By: Rebecca Sirull One great benefit of teaching in Colombia is the low cost of living, and the strength of the dollar, euro, or pound in comparison with the local peso. If you come... 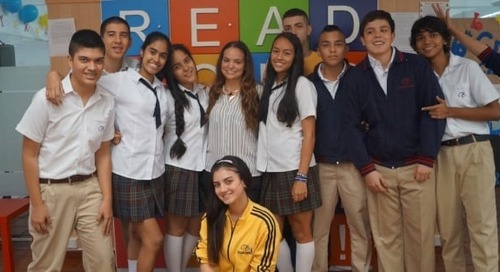 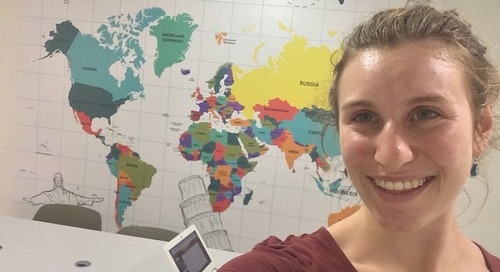 Bus rides, Blisters and a Touch of Magic: My Experience with an On-the-Ground Job Search in Colombia

By: Rebecca Sirull I’ve actually gone through two different English teaching job searches in South America, and had two extremely different experiences. When I first left the US, I... 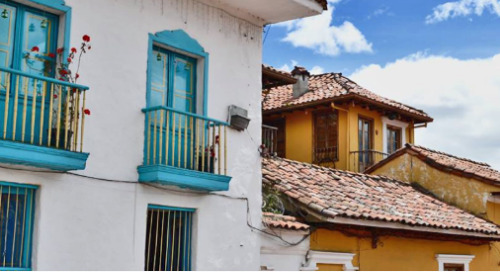 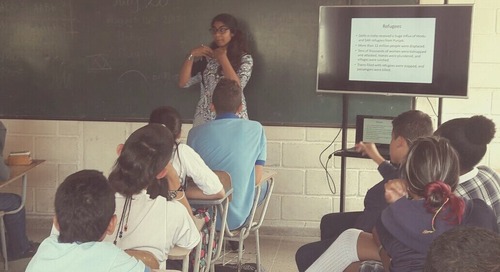 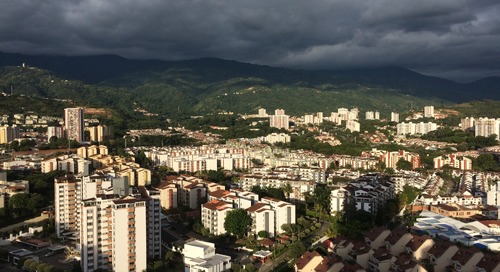 By Rebecca Sirull In just one short year in Bucaramanga, I’ve experienced a surprisingly large number of living situations. The culture here is different from the US in that young... 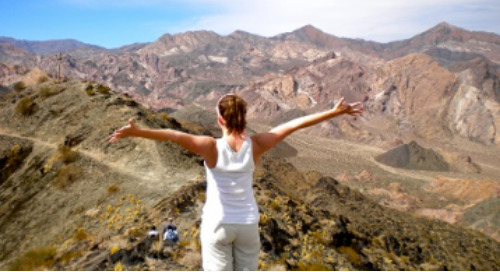 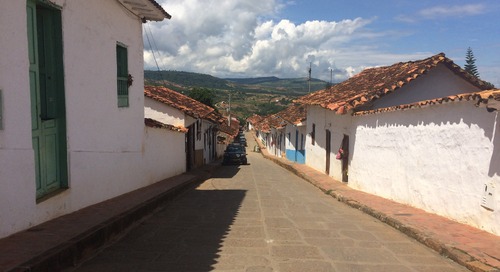 The Biggest Challenges I Faced Adjusting to Life in Colombia 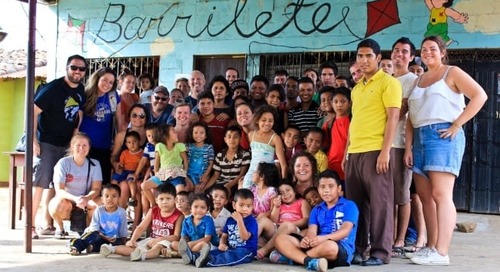 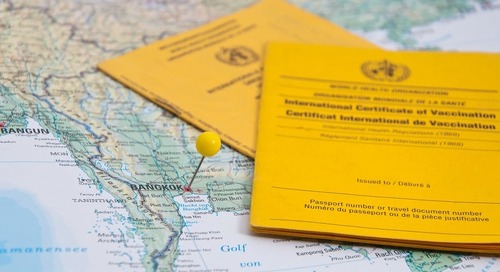